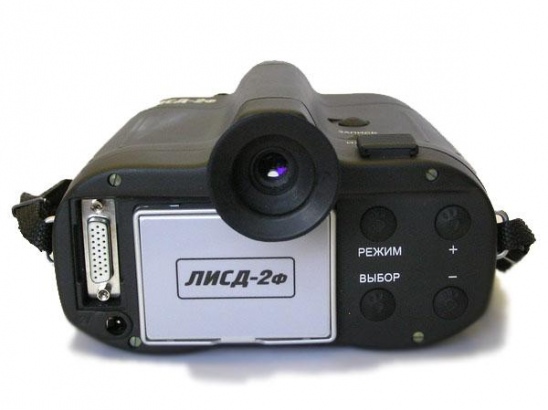 Now for on-line control of the high-speed mode on highways the inspectors of traffic police use the devices of radar type in which Doppler effect for measurement of a speed is used. The velocimeters of BARIER-2M, SOKOL, ISKRA-1, RADIS, etc. belong to these devices. Their main characteristics are presented in the Technical Means of Traffic Safety catalogs regularly issued by Research Center of Head Department of Traffic Police. These devices are rather simple in design but have a wide directional pattern of radiation. The best samples have a divergence of radiation from 5 to 10°. Essentially, by this is meant that at a distance of 100 m a beam of the device takes several lanes, and at heavy traffic a reflected signal comes at once from several objects. Belonging of the results of measurements of a speed to the specific vehicle in the stream of cars (identification of the car) is determined by the inspector of traffic police, and as a consequence has a subjective character. This often leads to conflict situations during analysis of traffic violations. It is possible to identify uniquely the car when using radars only in the case if there is a single vehicle on the road.

The use of the devices for measurement of a speed with a narrow directional pattern at which a laser spot does not exceed the vehicle sizes allows for the cardinal solution of this problem. Laser velocimeters have such feature. They use a laser radiation with a divergence of 2…4 mrad (0.1 …0.2 °). At the same time the size of a laser spot at a distance of 300 m is no more than 1.2 m х 1.2 m and does not exceed the sizes of ZHIGULI car that allows unique identification of the vehicle in the stream of cars. Aiming at the vehicle is carried out by the inspector by an eyepiece that allows observation of the car at a distance up to 400 m and holding the center of radiation on it.

In this connection the share of laser velocimeters in the total quantity of speed measurement instruments increases all over the world. The following devices belong to typical laser velocimeters: SpeedLaser (Laser Atlanta Company, LLC, US), EUROLaser (Trafic Tpansport Company, France), Stalker LIDAR (Applied Concepts, Inc., US).

The role of evidential base for definition of violation of the traffic rules increases due to the acceptance of the new laws by the State Duma which came into force since July 1, 2008. In this connection the value of the technical means, which provide photorecording and identification of the violator’s vehicle, increases. On this basis the new LISD-2F laser velocimeter was developed and manufactured by the end of 2006. This device allows recording the color photo of a vehicle and storing the fixed frames with the results of measurement of a speed in the internal memory. The fixed frames can be rewritten in memory of the computer as well as can be overviewed and printed by means of the special software.

The LISD-2F Laser Velocimeter/Rangefinder is designed for measurement of vehicle speed   and photorecording  a fact of infringement of the traffic regulations and the speed regime by a vehicle.

The LISD-2M Laser Velocimeter/Rangefinder is designed for measurement of vehicle speed   and distance to  various objects.